The sequel to Sega Bass Fishing or "Get Bass", Sega Marine Fishing takes almost everything from Sega Bass Fishing and improves it almost exponentially. What you end up with is more fish to rob from their ecosystems, more lures to catch them with, more modes, over 200 unlockable items, an aquarium, mini-games, improved graphics, a better soundtrack, more sophistications to the gameplay, and easily one of the best arcade-style fishing experiences you'll find. With exotic locales, a large variety of fish that can be captured, fish of varying size and weight, more intricate fishing rod manuevers and "Lure Actions", more challenging fish, and greater longevity, this game is packed with excitement.

Sega Marine Fishing is a fishing video game in which the player attempts to catch various marine sport fish. Each stage has its own point target. Players score points each time they catch a fish. Points vary from fish to fish - the more difficult the fish the higher the points. If the Total Points scored reaches the Point Target before the countdown time becomes zero, he/she can move on to the next stage.

The gameplay's emphasis is on enticing fish to bite onto the lure and then successfully fighting the fish and reeling it to the boat. As the player catches fish, they earn item cards. Items earned with these cards include fish and artifacts for an aquarium, fishing equipment, additional boats, and various goofy accessories such as different colored shorts. 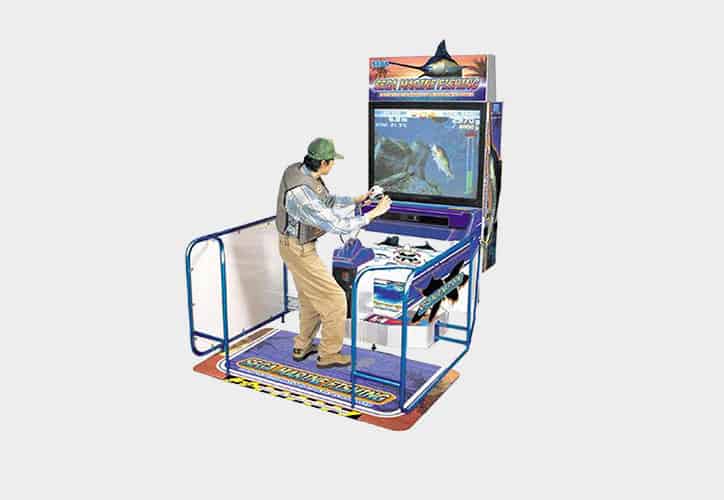 We offer an extensive range of arcade games and simulators to suit your needs. Whether it 's a short term lease or a long term revenue share, Commercial or Corporate, ACM can provide a package that's right for you....read more

The event went really well. The game was a definite hit – it was very engaging – with both individuals and the crowd. There was definitely some excited yelling and laughing which was good in comparison to the serious nature of the rest of the event. I’d never played Pac Man prior to that week and by the end of it I was pretty addicted...read more
LeapThought NZ Ltd

This website uses cookies to improve your experience while you navigate through the website. Out of these cookies, the cookies that are categorized as necessary are stored on your browser as they are essential for the working of basic functionalities of the website. We also use third-party cookies that help us analyze and understand how you use this website. These cookies will be stored in your browser only with your consent. You also have the option to opt-out of these cookies. But opting out of some of these cookies may have an effect on your browsing experience.
Necessary Always Enabled
Necessary cookies are absolutely essential for the website to function properly. This category only includes cookies that ensures basic functionalities and security features of the website. These cookies do not store any personal information.
Non-necessary
Any cookies that may not be particularly necessary for the website to function and is used specifically to collect user personal data via analytics, ads, other embedded contents are termed as non-necessary cookies. It is mandatory to procure user consent prior to running these cookies on your website.
SAVE & ACCEPT